This is the most expensive celebrity wedding ring! 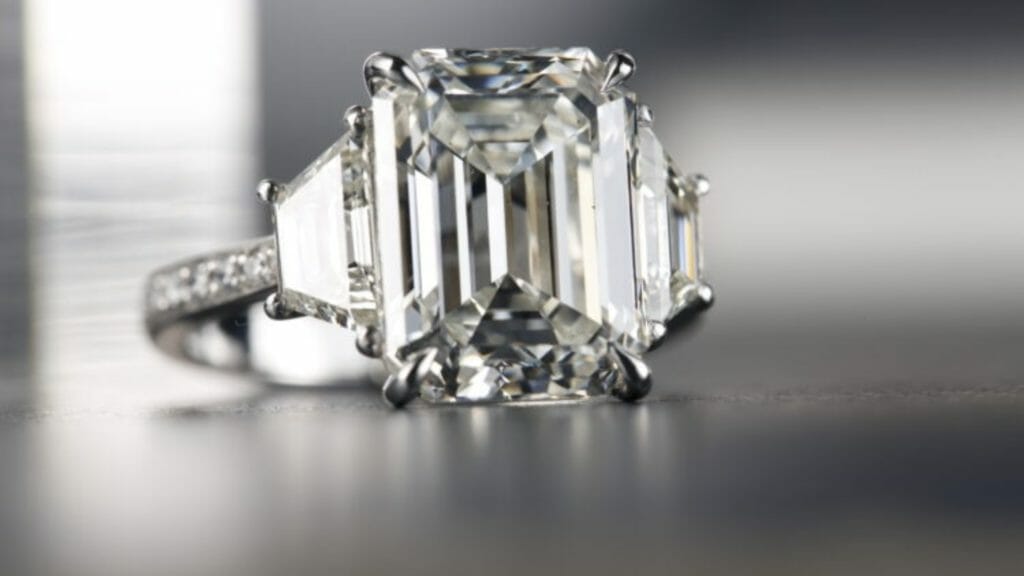 It’s no denying that your wedding ring is one of your most prized possessions, and no matter the style or the price tag, it is to be cherished for generations to come. However, the fun thing about celebrity wedding rings is that the more you read about them, the more skewed your perception of “extravagant” becomes.

It’s ironic how a ring that costs $150,000 is no longer considered worth a second glance when you compare it to one that costs $8.8 million! But on whose finger does the most expensive ring rest? Keep reading for the answer.

Extremely beautiful! There’s nothing quite as spectacular as a celebrity wedding ring. It’s true that they are all absurdly beautiful, large, and therefore pricey! But there are 10, in particular, that stands out above the rest as the most expensive celeb wedding rings of all time!

Number 10 sees Ben Affleck who reportedly spent $1.2 million on a ring designed by the famous Harry Winston! Featuring 1.6 carats of light pink diamond, the stunning ring was given to Jennifer Lopez.

Catherine Zeta-Jones makes it in 9th place with a 10-carat marquise-cut diamond. It was a unique ring with the solitaire set horizontally instead of vertically and surrounded by 28 smaller diamonds. This ring was given to her by their husband Michael Douglas.

Jacky Kennedy Onassis joins the list of the most expensive wedding rings with a 15-carat diamond! The former First Lady of America and the wife of former President  John F Kennedy received that ring from her second husband Aristotle Onassis.

Melania Trump, another former First Lady of America, is also on the list of the most expensive wedding rings! She was presented with a 15-carat emerald cut diamond set in a platinum basket that’s surrounded by a beautiful leaf design, by former US president, Donald Trump.

Jennifer Lopez receives a second mention in the most expensive celebrity wedding ring list of all time, with the engagement ring she received from ex-husband Marc Anthony. It was a beautiful 5-carat light blue diamond designed by jeweler Neil Lane.

If you are still wondering who’s also on the list of the most expensive celebrity wedding ring, the number 5 sees Grace Kelly! Grace was given a stunning 10.47 emerald-cut diamond flanked by two large baguette diamonds for her marriage to Prince Rainier of Monaco. This ring was by renowned French jeweler Cartier and still looks fabulous after more than 50 years.

Paris Hilton was the owner of one of the world’s most extravagant engagement rings; a 24-carat diamond solitaire flanked by two more large diamonds. However, the engagement did not last, and she ended up selling the ring at auction to support people affected by Hurricane Katrina.

Beyonce owns the third most expensive celebrity wedding ring of all time! Jay Z picked a flawless 18-carat flawless diamond that is set in platinum and an octagon-cut for Beyonce. The quality of the diamond is high to an extent that it has been officially certified as a premium and exceptional stone.

Previously known as the owner of the most expensive celebrity wedding ring of all time, the queen of diamonds Elizabeth Taylor sees number two with her $ 8.8 million engagement ring!

Though the Hollywood legend acquired multiple engagement rings throughout her life, her most expensive was technically not an engagement ring at all! The story goes that Richard Burton gave Taylor the 33-carat Asscher-cut diamond on a yacht four years after they were married. It was the Cat on a Hot Tin Roof actress who decided to turn it into a ring.

And now, coming in at number one is none other than Mariah Carey and her infamous $10 million baubles from David Packer. The 35-carat emerald-cut diamond ring is truly a standout above the rest! But unfortunately, their relationship did not have a happy ending as the couple’s engagement only lasted 7 months! Mariah Carey holds till the moment the top spot for the world’s most expensive engagement ring.

In the case of some celebrities, their naked ring finger doesn’t mean that they’re single. There are plenty of celebrities who don’t wear wedding rings as they eschew the ring because they spend their live-in costumes on set, so have to take it off all of the time.

Now that you’ve discovered on whose finger the most expensive celebrity wedding ring rest, check out these 5 most beautiful things to expect in an Emirati wedding!

A traveler, wanderer, driven by creativity and ambition. She’s a Marketing Executive who loves transforming her ideas into creative blog posts with the brides-to-be in mind! A writer by choice, Graphic designer by profession, she incorporates her originality in all her writings!
celebrity rings engagement Expensive rings weddings